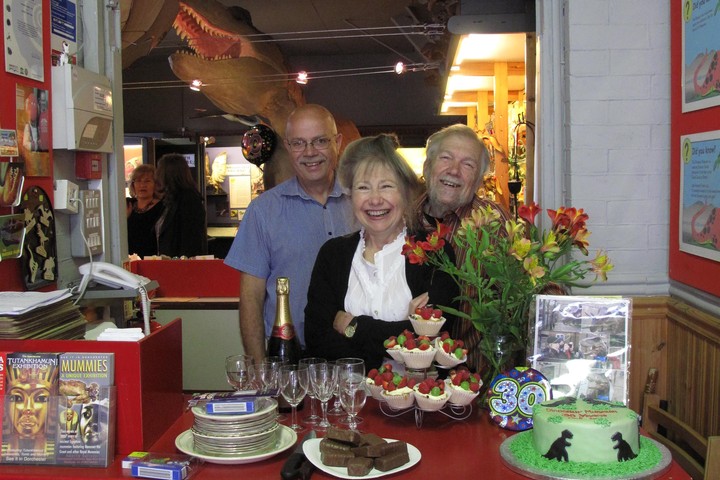 The Museum opened in Dorchester to great acclaim in June 1984. From the very beginning visitors loved its novel and innovative approach to dinosaurs, and the museum quickly became the Town’s foremost visitor attraction, bringing over the years, millions of dinosaur hungry families and schools to the county town over the years.

30 years ago, the Dinosaur Museum broke new ground with its unique approach to its displays and method of communicating with its visitors. This approach has influenced major museums in Britain and abroad.

The Museum is independently run and is not funded by local or national government or charitable bodies. It relies on self- generated funds to run the Museum and its popular educational service to schools.

The Dinosaur Museum was a pioneer of modern inventive and fun interactive museums. It was the first museum in Britain to use computers for display exhibits with specially written programs.

The Museum also invented the ‘Feely Box’ the most popular of all the hands on displays that has since spread to become a standard hands-on display in many museums.

Over the years the Museum has received wide praise from museum professionals. Many representatives from other museums and dinosaur projects have sought help in applying the Dinosaur Museum’s innovative approach and techniques to their own institutions & environments.

These include amongst others:

The Dinosaur Museum has consistently enthralled and entertained visitors with its mix of fossils, skeletons, and dinosaur reconstructions combined with hands on and multimedia displays. Many who visited the Museum as children have fond memories and are now returning with their own children making the staff feel distinctly old!

The Museum’s Curator, Tim Batty, is enthusiastic about the future. He said “The Museum is an interpretative museum. We continue to add new innovative ideas and displays, bringing new approaches that we hope will bring dinosaurs to new generations.

The Dinosaur Museum is a family museum and has frequently appeared on television, usually in children’s programmes such as Blue Peter, the Really Wild Show, Tikkabilla, the Tweenies and many others.

As part of its policy of supporting national and local charities it has helped Children in Need and The World Wild Life Fund for Nature. One of its dinosaurs claimed the record for wearing the biggest red nose in its effort to raise money for Red Nose Day.

Percy the Museum’s T rex will celebrate his and the Museum’s birthday by tucking into a cake with candles. It has proved impossible to get 65 million candles on the cake so he will have to make do with 30!

The oldest known dinosaur is Saltopus. It was a small carnivore that lived 245 million years ago. Remains…
View more Dino Facts